Last week a friend was visiting from Chicago. What a week! He was knocked off his bicycle and ended up in hospital in Ragusa. Thankfully, all was well – just bruises. He was not kept in. 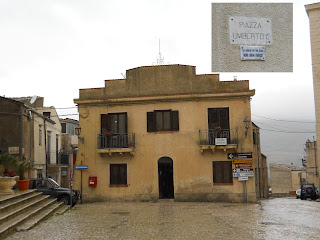 The following day we drove to Palazzo Adriano in Palermo province, which is where his maternal grandmother hails from. It’s also the place where ‘Cinema Paradiso’ was filmed. What a day! Eight hours driving, heavy rain, even snow. It was cold! We did the tour bit and then got ripped off in a restaurant. The town hall was closed – just that day – so he didn’t get to look at the civil records. Still, it was worthwhile.

The rain continued, then we had storm force 10 winds in the harbour. Definitely a week to remember!