Over at Goodreads Giveaways there are 10 paperback copies of my latest Steve Baldwin thriller ‘Cause of All Causes’ available. Hop over there now and get your name down (you don’t have to buy soap powder to enter)! The competition closes on 20 August. 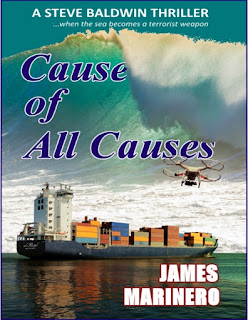 The terrorist Abu ben-Zhair is on the cusp of realising his vision to destroy the West and cow the East, thereby succeeding in his avowed ‘Cause of All Causes’ to establish a Caliphate which rules half the world. In this terror thriller, Steve Baldwin is sent into Algeria with only Ellie Williams (MI6) to support him – and GCHQ hackers to guide them.

The gritty covert action and espionage moves from Gibraltar to Algeria – and onward across the Atlantic Ocean. Ben-Zhair has identified one critical point on the earth’s surface where one determined terrorist with resources and imagination can trigger disaster on a global scale – and he has the weapon for this purpose.

In the murky world of counter-intelligence, trust is a tradable commodity and the Geo-political turf wars continue while ben-Zhair moves towards his climactic attack on the US and Europe. Action and adventure moves to a terrifying close and the international political maneuvering continues – up to the very last seconds.

If you prefer to be sure of your copy, then you can pre-order one on Amazon now (Kindle availability 20 August) or get an epub at Lulu (for iTunes, Nook, Kobo and other readers).